Constructing a new office building over a brownfield reclamation site requires expert planning and guidance in order to prevent any gases from previously contaminated soil from entering the occupied spaces. This is the kind of challenge where we excel.

We designed a vapor intrusion mitigation system in accordance with EPA and NC Department of Environmental Quality guidelines. The system included suction pits connected to exhaust fans on the roof to remove potential contaminants below the slab before they had a chance to enter the building.

We also conducted quality assurance inspections during the construction and conducted vapor barrier integrity testing using a non-toxic synthetic smoke to verify that the installed system was free of leaks and working properly. After construction, we gathered indoor air quality samples quarterly to test for VOCs (volatile organic compounds) and monitored the pressure under the slab to make sure the exhaust fans were depressurizing the entire sub-slab area.

We provided reports to the NC Department of Environmental Quality describing the successful performance of the system. 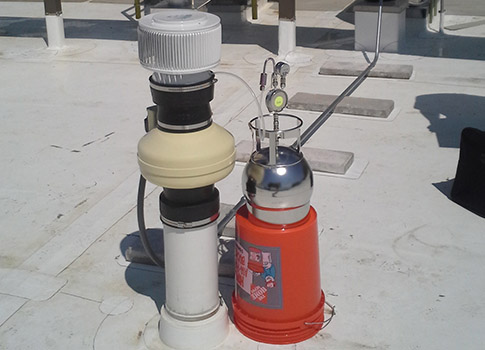 Periodic air quality testing of the soil gas exhaust from under the slab was necessary.