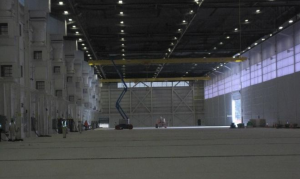 HPBS engineers uncovered deficiencies during the inspection, which were repaired during construction–saving expensive repairs that would have been required after construction was complete. 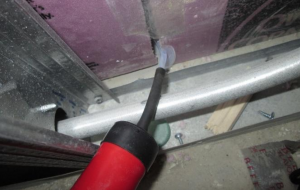 When the quarter-mile-long building was finished, HPBS conducted air leakage tests using multiple blower door fans controlled simultaneously by computer. The testing protocol required 24 fans running at the same time to bring all zones in the building to the same test pressure.

First, the larger second-floor zone was brought to the test pressure. Then, one at a time, all of the 18 smaller first-floor zone spaces were brought to the same pressure, by spinning their fans at different speeds.

Every time a new fan was turned on, the whole system needed to be readjusted to the new conditions. It was one of the most complicated test setups documented by the test fan manufacturer. The results of the test showed that the building exceeded Naval Facilities Engineering Command (NAVFAC) performance requirements. 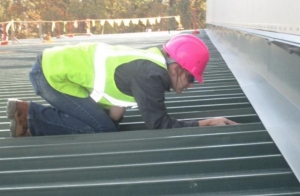 Inspecting the low-sloped roof transition to the high wall area of the hangar.